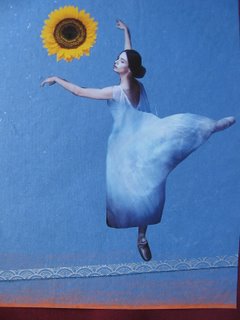 You are assigned to spend a year in service to others. To what region of the world would you go? Why? What is the most worthy humanitarian pursuit you can imagine?

Comments:
Where: My own neighborhood.

Why: Our country needs more help in some areas than almost anywhere. Nature has been abandoned over the hugely inadequate measuring tools of science, the skewed assumptions made by humans trying to decifer scientific data, and strange puritanical philosophies based on anthropomorphic archetypes. This has led to war, poverty, injustice, and for those who succeed here, a very shallow existence. In general, a lot of suffering goes on right here because life is out of balance.

Most Important: Living simply. Spontaneous and simple works of kindness, tolerance, generosity, and humor tend to spread from one person to the next. It's contagious and can reach to the ends of the earth from wherever we are.

If you go to a foreign country and help build huts and schools then the effects start there, and that's fine. But no matter where you start, the effects will spread.

The least effective thing you can do is throw money at a foreign country. It will be intercepted by one or more of the following: the government of that country, administrative costs, some bureaucracy, or some warlord. I suppose there may be exceptions with some charitable organizations, but there's so much we can do right here by giving and living correctly.

I don't know what I can do, but at this moment, I can think of nothing other than the struggles in the Sudan. I've been reading a lot about Darfu lately. I'd like to do something there.

In my own backyard of course. Unfortunately you can not care for someone more than they care for themselves. At some point your offer of help or service, becomes a hindrance to an individuals development. A person has to have the desire to help themselves. Given that attitude they can prosper from the help offered so they no longer need assistance.

This is the flaw in many community service programs. It becomes a crutch that individuals rely upon and use, rather than learn from and grow.

I speak from experience. I've been of service many times. Sometimes it was gratifying, more often it was frustrating.

Attitude is everything. You must also learn to respect the choices that people make for themselves. Set boundaries on your own personal involvement.

Tough lessons for everyone to learn.

I would love to be able to teach all the people of under developed nations how to say "fuck off you capitalistic bastards". And mean it. Life would be so much more meaningful.

i will go where im happy like the osean! if im happy i will reflect that to others...

that was the most painful lesson i was ever taught, but also the most liberating...

Within a block of each of us, at any time, are situations open to being improved by someone brave enough to step out of the crowd, become exposed, cut against the grain, and steer the the common weal to better ground. A troubled kid might need encouragement. An old person might need a house repair, or a chaufferred drive somewhere. Trash may be lying in the park, or dog litter. People in special work have the extreme opportunities, with the sick, the dying, the lawbreaker, the addicted, but everyone has openings all around, mostly passed up out of fear. Fear equals death. Act on fear, and something dies. A chance, a new horizon, some unnamable vague good retreats back into shades of lost beginning, each time we accept fear, the devil's chain. No need to imagine exotic or quixotic scenes, like battling the Janjuweed, or comforting Zimabwe's HIV folk,... faraway service seems a badge of honor and too wonderful an attractant later. One ought not act to be honored. You will do it wrong, by craving your own rise. You will give up too soon, seeking mirrors for the old you, when the new you is a mystery, even while arriving.The need should come to you. (It might undo you.)
You could fulfil it silently, without effort, your secret, you and god. You might let it tear you down, to be close to ground and better coiled to serve again the next time. Such steady movement downward could restring society from the inside, all unknown. What a world would that one be! Invisible to fools!

I would perpetrate a loving brain-tousle cleansing humanity's love of fuel powered locomotion. In place of this I would leave an acumen for dismantling fractious paradigms and an ingenuity for reassembling them into bicycles.

Anywhere something would actually come of my effort, and I wouldn't get raped.

Like drt, I would start in my own neighborhood but for different reasons.

Black neighborhoods in America are no different than colonies. I would work to make black neighborhoods politically, economically, and militarily autonomous. As long as we are not in control of our own destinies, we can never be complete human beings.

Location... where I live now. I am part of humanity and improving my own area is a service to myself as well as others.

My Daughter is Onboard Two Years in Africa

I agree with some other posters who have indicated that by helping others we may actually be hindering their ability to help themselves. So given that, I'd spend my year someplace where there's been some sort of disaster. I won't be trying to impose a new life on anyone, I'll just be helping them get back to their old lives. Maybe I'd spend a year doing clean-up on a beach that's been spoiled by an oil spill. The sand won't become dependant, won't resent me, and won't feel guilty.

If it were for just a year, I'd choose somewhere in Latin America. Probably Central America. I'd want to work with women and children. Maybe on literacy issues or on health care issues. I have a soft spot in my heart for Latin America because I spent several months there in college and saw so much poverty and suffering. I'd love to go back and be able to do something to improve things there.

I would stay in North America.
I would teach loving kindess, healing arts and help parents understand their children and children to understand themselves.

Where doesn't really matter in the scheme of things- just where you want to.
But I can't think of any service that would top children, especially starving children.

I'd go to the United States Congress & teach them that the reason they existed is to "Be in service to others".