A World Without Israel?

Sometimes I wonder what the world would be like today had Israel never formed in the 1900s -- for example, if the Jews fleeing their fate in Europe during World War II went to various countries outside the Mideast and maintained their lives in these new locations instead of in the land we now call Israel. How would the world be different today?

Some scientists predict that the tipping point for extreme climate change may have already passed, meaning that nothing can be done to prevent the inevitable cycles of nature from altering life on earth. Do you believe that all species face eventual extinction, or that consciousness will find a way to perpetuate itself before an irrevocable calamity changes the environment on this planet? How does your view shape your thoughts on reproduction?

Is there a deeply entrenched pattern or habit in your life (this could be a person, place, thing or behavior) that you wish you could abandon? Why don't you?

Implications of America in Iraq?

On the whole, is the world made worse or better as a result of America invading Iraq?

Would you rather be deeply romantic with someone in front of a living-room fireplace, on a spiral staircase, or in a cavern?

Do you feel that time moves at a different pace in various situations, or does a minute, or an hour or a day feel more or less the same to you regardless of content?

If we type my last name, Pickover, into the Google image search, we find an amazing array of images -- from computer graphics, to creatures, to startling people. Which image do you like best?

A wise man tells you, "An ant is bigger than an elephant."

How could he be right?

The dilemma of the dials 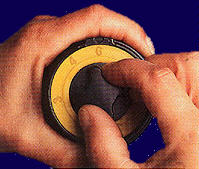 You have the opportunity to determine the beauty level and intelligence level of your child, before the child is born, simply by turning two dials from 0 to 10, 10 being high. "5" is average. To what number would you set your dials? 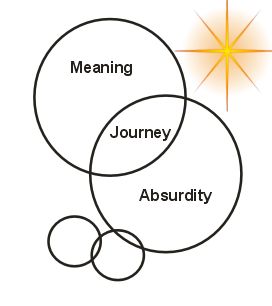 Using the following diagram, how would you describe your own journey?

Do you agree with this Heinlein quotation: "A human being should be able to change a diaper, plan an invasion, butcher a hog, conn a ship, design a building, write a sonnet, balance accounts, build a wall, set a bone, comfort the dying, take orders, give orders, cooperate, act alone, solve equations, analyze a new problem, pitch manure, program a computer, cook a tasty meal, fight efficiently, die gallantly. Specialization is for insects."?

Is there a question you're dying to ask a particular person but you don't because you fear the answer? What is the question?

How can we we improve the Galactic Question Center so that it is more interesting, attractive, or useful to you? Are we asking the wrong kinds of questions if we would like to generate more interest in this Blog?

Is enlightenment a permanent condition that becomes part of the fabric of consciousness once achieved, or a fleeting state that can arise in anyone at any time?

You are browsing eBay on the Web with an alien. You will buy the alien any object in the following list that the alien chooses. Which do you think the alien will choose? Why? Which object is the least likely to be chosen by the alien?

1. Several unpolished ancient Roman coins all from Thrace and the Balkan peninsula after the Roman conquest in 46 AD.
2. Anna Kournikova poster (25" x 35"), never used, along with a protective mailing tube.
3. Burlap sack containing uncut emeralds straight from a Brazilian mine.
4. 100 top-selling CDs
5. Chess set comprising a solid glass board with alternating frosted squares, along with chess pieces made of clear glass.
6. A box containing Adobe PhotoShop software.
7. A 10 by 14 foot handmade Kerman Persian rug.
8. Grandfather wall clock of beautifully crafted cherry wood, with glass front revealing a swinging pendulum. The clock chimes twice on the hour and once every half hour.
9. French empire crystal chandelier, dressed with 24% lead hand-cut crystal. This chandelier is characteristic of the grand chandeliers that decorated the finest European palaces.
10. Cute giraffe pair with intertwined necks (small statue).
11. American-flag, alabastrite bookends adorned with highly-detailed renditions of eagles.

Is it possible to win this game ?

Approach the book nearest you and open it up to a random page. Point to the first sentence you see. What does it say?

"What I saw before me was a small room like the interior of a tent, populated by enormous insects. These insects were at once strange, distant-seeming creatures, totally unlike me and not communicating any sense of the human at all, and yet at the same time aware of me in a way that eloquently and terrifyingly signaled intelligence."

How do you feel about the author of this, Whitley Strieber? Does this ever make you question the nature of reality?

Do you think a hotel is obligated to inform soccer parents that a group of swingers are also booked for the night to avoid a situation like the one that took place in Orlando over the holidays?