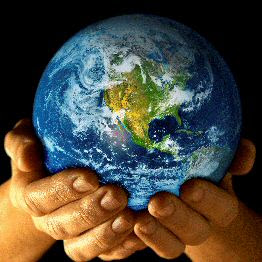 If God had created an Earth with two identically-shaped landmasses, for example two square continents, the effects on the world and religion would be profound because they would suggest the presence of a creator. What effect would the existence of a perfect square or circular continent have on religion and science?
# posted by Cliff Pickover @ 1:56 PM

Comments:
I don't think so because that would have always been known to us, we wouldn't know any difference therefore we wouldn't consider it so relevant. There is a lot of perfection around us that gives evidence of a supreme creator and we still question the existence of such being

We see order and perfection in nature already through patterns like fractals. It's difficult to imagine that such designs could be accidental and exist without the presence of a creator. There are many obvious signs of a creator already around us and yet many of us fail to acknowledge them. The very fact that we exist and are conscious enough to know we exist could be proof enough. I don't think God could make it any more obvious. I doubt that perfectly-shaped continents would change anything. People would just claim that the phenomenon is just accidental like their very own existence.

To think that geometric patterning in nature is proof of "a creator" is specious. Such patterns stand as proof of empirical scientific method and natural order. The juxtaposition of chaos and order is the most ancient example of human observation and methodology. Understand the Chaos Theory and see that even apparent chaos has underlying natural order. Ascribing order to the idea of God is a simplistic failure of education and intellect. The idea of God can be removed and the logic of nature and the method of science will still persist without collapse or absence of essential elemental components.

We have spent centuries unpicking the differences between orderly structures in nature that are due to the blind laws of physics (the regularity of Pulsars, the giant hexagon at Saturn's north pole, the structure of crystals) and other phenomena that might suggest the hand of a sentient creator.

We've made the mistake often of saying "The only explanation for the existence of X is the sentient intervention of a higher being" only to find that naturalistic explanations suffice. For example, people often quote the "tuning" of Earth's environment as being clement for life, without bothering to mention the anthropic principle and the scale & age of the Universe as sufficient explanations.
Similarly, I predict that the complexities of biological life will continue to be understood through "blind" evolution rather than through supernatural fiat.

I have often thought along the lines of this thought-experiment. "If only there were some totally artificial, non natural sign which would tell us about a celestial author. My version went along the lines of God putting the first verse of Genesis and his name, in Hebrew in mountain chains on the entire rear-side of the Moon. Perfect: Non-fakeable, non-natural. Proof. Then I read Sagan's "Contact" and was entranced by his suggestion at the end of the book that if you plumb the far reaches of the expansion of Pi (π) in binary, then you will see a "message" from the author of the universe. Nothing much at first, just a "This is on purpose" and the promise of more to come as your species' talent for Math advances. Personally, I think that kind of sign is more likely: woven into the fabric of the Universe. Accessible from anywhere, not stuck on the face of an individual planet.

I'll have what Nathan's having.

I think it is the nature of the universe that the evidence for a Creator will always be able to be "reasoned away". If ‎the evidence were incontrovertible, there would be no basis for the Creator to assign merit to those who chose to believe in Him. Those who choose to believe in a Creator on the basis of the existing evidence get credit for that ‎on their heavenly evaluation sheet. Those who don't, don't. There are other ways of getting credit, too, but this one is so ‎easy it's a "sin" to throw it away.‎

Hey, Anonymous, For a long time I believed in that version of G-d too. Your "heavenly evaluation sheet" gave it away..."He's makin' a list, checkin' it twice, gonna find out who's naughty or nice.."

It's that big guy in the red suit,right? The one chug-a- lugging an icy coke, a bag of blessings and a sack of coal at his feet..Loves children, visits at the darkest moment and like Sol Invictus and Jesus, (and fifteen other versions), heralds the resurrection of sunlight.

I believed deeply in the magic of the red suited guy too, until the night I waited up just to meet him and I guess he thought I was another doubting Thomas or something and so didn't show up.

I found the lump of coal in my throat the next day and for many years was cursed to wear a red suit in cold winter collecting for the poor or giving gifts to my own beguiled children. Recently I've retired.

You know save a tree for the new and real g-d of Nature.

'Creation' is only a human notion, after all.

Are all notions simply human notions?

You literalised my use of 'see'.

You put all the pepper you need on my omelette, Bob.

to me square identical continents would be proof not only of an unimagenitive creator but allso of a disturbed mind, qed. not only is there a god he/ she/ it/ have gone incurably insane and we are doomed!

Aliens could have made those continents square. Doesn't imply "god"

None of these three world-views would be remotely affected by perfect symmetry in the continents. People will believe what they will believe.

Personally I am of the 3rd view stated above. I can't prove this nor should I have to. Whichever worldview someone chooses of those three, there is an element of faith in that which is impossible to prove.

If were that way from the start nothing would change because there would be no antecedant. It would just be the way it would be and that's that. It certainly would be a very alien planet. Perhaps humans would never have come about- or dogs or cats or whatever. And climate would be stranger than anyone could believe.
Actually, its shaped a bit like a pear, isn't it? right now we live on a planet with 7 billion souls with a sustainability for 2 billion. I'm glad I won't be around because I'm too old.